SMA Inverters – Superior quality at an affordable price. With over 3000 employees in 20 countries, and more than 3 gigawatts of solar inverters installed globally, SMA is the world’s largest solar inverter manufacturer. Established in 1981, they’ve been developing and delivering some of the world’s most reliable and affordable PV inverters for over 30 years.

All SMA inverters come with a standard 5 year manufacturer’s warranty, and customers can choose from a wide range of warranty and service options, combining them into a tailored support package. Extended warranties are also available for 10, 15, 20 and 25 year periods.

All SMA inverters are: 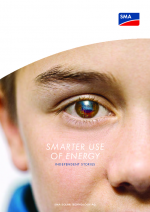