Calculating your return on your Solar Investment in 2021

Investing in solar is a big decision. After all, we can admit that solar is no small purchase, though it has become substantially more affordable over the years, and green-loan finance is now available.

But when looking at that cost, you also need to consider just how quickly that cost will be returned to you in savings. Since after that point, your solar energy system has paid for itself, and now all the savings it generates is just money in your pocket! It’s much quicker than you might think.

To get a basic idea of how much you can save with solar you can use our solar calculator, but today our focus is specifically on how long it will take your system to pay for itself.

So, how do you calculate this return on investment, well first you need to gather a few pieces of information.

So let’s create an example:

David isn’t home during the day, so power consumption is lower than it could be, resting around 30% average daily consumption, meaning that 70% of the power that David’s solar energy system generates is exported to the grid. On average, his system produces 20 kWh worth of power each day, this fluctuates throughout the year, but is a reliable average for our purposes.

First, let’s take the hypothetical that David consumes 100% of the power that his system generates, the calculation for that situation is shown below. 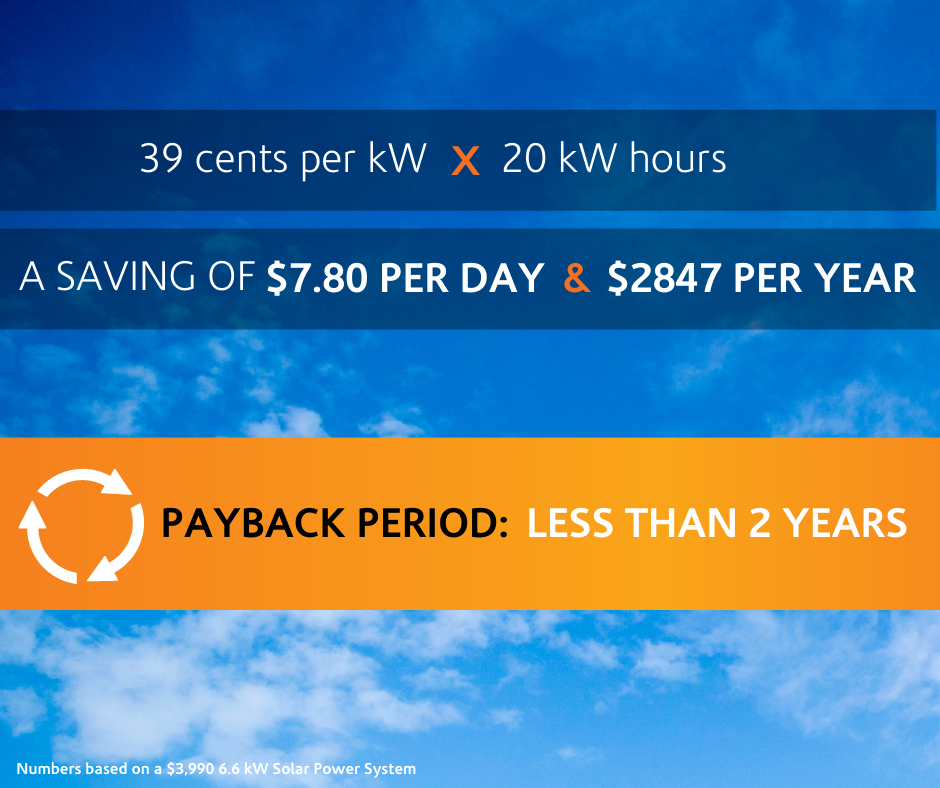 For this calculation,  we take the kW cost of energy from the grid and multiply it by the amount of energy that your system is producing daily. This gives you your daily savings, as this is energy that, at 100% consumption, you would have otherwise been purchasing from the grid.

You then multiply that number by the number of days in a year to see how much you’ll be saving per year. Then by comparing this to the cost of your system you can see how long it will take for the system to pay for itself. In this case, it would take David less than 2 years for his system to pay for itself, considering solar energy systems generally have a lifespan of 25 years, that’s a heck of a lot of money in his pocket.

Exporting Energy Back to the Grid

So let’s expand that equation to take into account David’s energy consumption rate. You can see these in the infographic below, at first glance it may seem complex , but it’s really not much more complicated than the previous example. Let us show you: 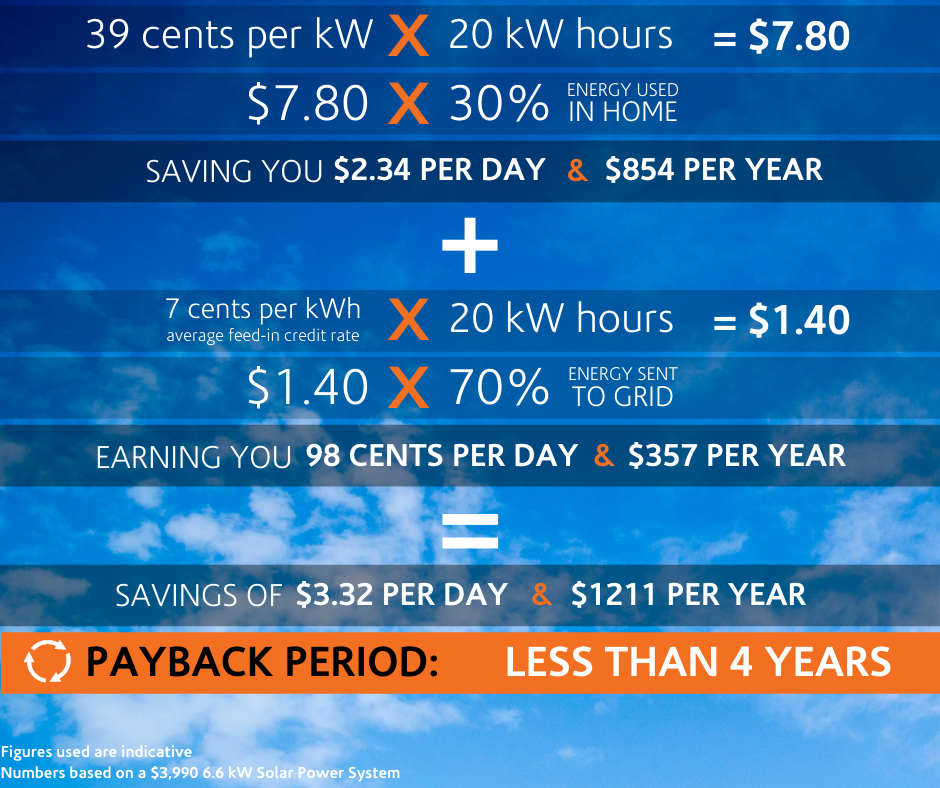 So, to work this out, we took the initial daily savings (from the previous calculation) and took 30% of that (in keeping with David’s 30% consumption rate). Then we found the feed-in tariff rate for his area, in this case, 7 cents. We multiply that by the system's production to see what he’d be receiving if he exported all energy produced, then we take 70% of that, which is equal to his export rate.

Adding the daily and yearly savings of these two figures together gives us his total daily and yearly savings. As you can see even at only 30% consumption (which is quite low, everyone’s consumption levels differ, and yours will depend on your personal circumstances), it will take him less than 4 years for his system to pay for itself, leaving more than 20 years of energy savings in his pocket.

Let’s look at one more example. David decides to invest in a battery when designing his system. That will let him reach that 100% consumption rate much more easily since it’ll allow him to store up all the energy that would otherwise be exported to the grid, for use when he gets home in the evening.

Without a battery, simply due to energy usage habits and the times that energy is in demand in the home, it's not possible for some homes to reach 100% consumption.

Batteries are becoming more and more affordable as time goes on, but they’re still a considerable investment. Still, let’s see how quickly a battery pays for itself. 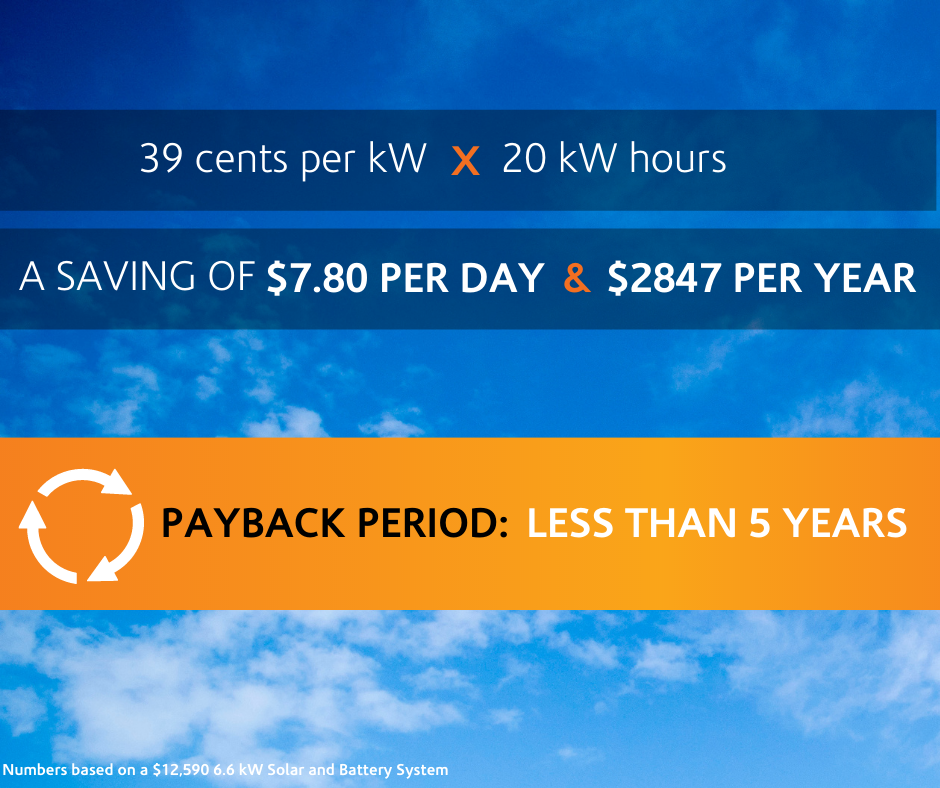 As you can see, due to the increased cost of the system it takes a bit longer to pay for itself, but not that much longer, especially considering the difference in price. Only a year's difference between a battery and 100% consumption compared to a 30% consumption rate.

Once his system has paid for itself, he’ll be able to enjoy all the fantastic savings that come with a 100% consumption rate for the lifetime of his system.

Keep in mind that all of the figures shown here were based on Western Australian data, for your own state's information, you can use our solar calculator.

So there you have it, with such a quick payback period, it’s easy to see how much solar can save you, isn’t it? Especially when you take into account finance options that let you start saving with solar right from the start.

We also have a number of specials available for every state that will let you see your system pay itself back faster than ever. If you’d like to learn more, or would like assistance determining just how much solar could save you, get in touch today on 1300 73 93 55 or check out this page for a free solar assessment.