Why add a solar battery system to your home

If you have questions about solar storage, here are some related links that will help you find your way to greater savings!

Home Solar Energy Batteries are an emerging presence in homes all across Australia. This has homeowners interested, major energy companies re-thinking their business, and construction starting on a $1B lithium refinery south of Perth for the creation of batteries. Everyone is making plans for the coming storage revolution, want help making yours? Here we cover key battery topics to help you decide if they're right for your home and what kind will suit your needs, including why you would add batteries, some myths about system compatibility and common battery configurations.

While adding a battery to store excess energy is fairly easy, advanced features like backup power might not work with certain types of battery systems. Be sure to mention this to your supplier or consultant if backup power is going to be a key consideration for you.

Note that many batteries on the market, such as the Tesla Powerwall, have a battery inverter and battery built into a single unit.

The battery is the part of the system that stores energy. The most common types of storage systems designed for residential use are a type of lithium-ion. Many common home batteries, like the LG Chem and Tesla Powerwall, are based on Lithium Nickel Manganese Cobalt Oxide (LiNiMnCoO2) - or NMC for short. NMC batteries tend to have higher energy density and higher charge & discharge rates, which makes it a common choice for electric vehicles and power tools. Other types of lithium-ion batteries such as Lithium Iron Phosphate (LiFePO4) are known to be longer lasting and safer for use in home batteries.

With a battery system, it will charge when there’s excess power being generated by your solar power system and discharge when your house is drawing from the grid (a shortfall). The more excess or shortfall power, the faster it will charge or discharge respectively. On its own though, the system doesn’t know when either of these scenarios occur. This is why you need a monitoring or metering device, as it relays this information to the inverter allowing the battery system to function correctly. The meter is usually quite small and installed out of sight, like behind, next to or inside your switchboard.

These monitoring/metering devices can even be added to a solar power system. While they’re not a necessary component for solar, they do provide the system owner with extra information. This includes seeing when there is excess power being generated, how much their house is consuming and what percentage of the power they produce they are using themselves. This is very handy for maximising your solar investment by optimising your power usage and knowing what size battery system you’ll need later. 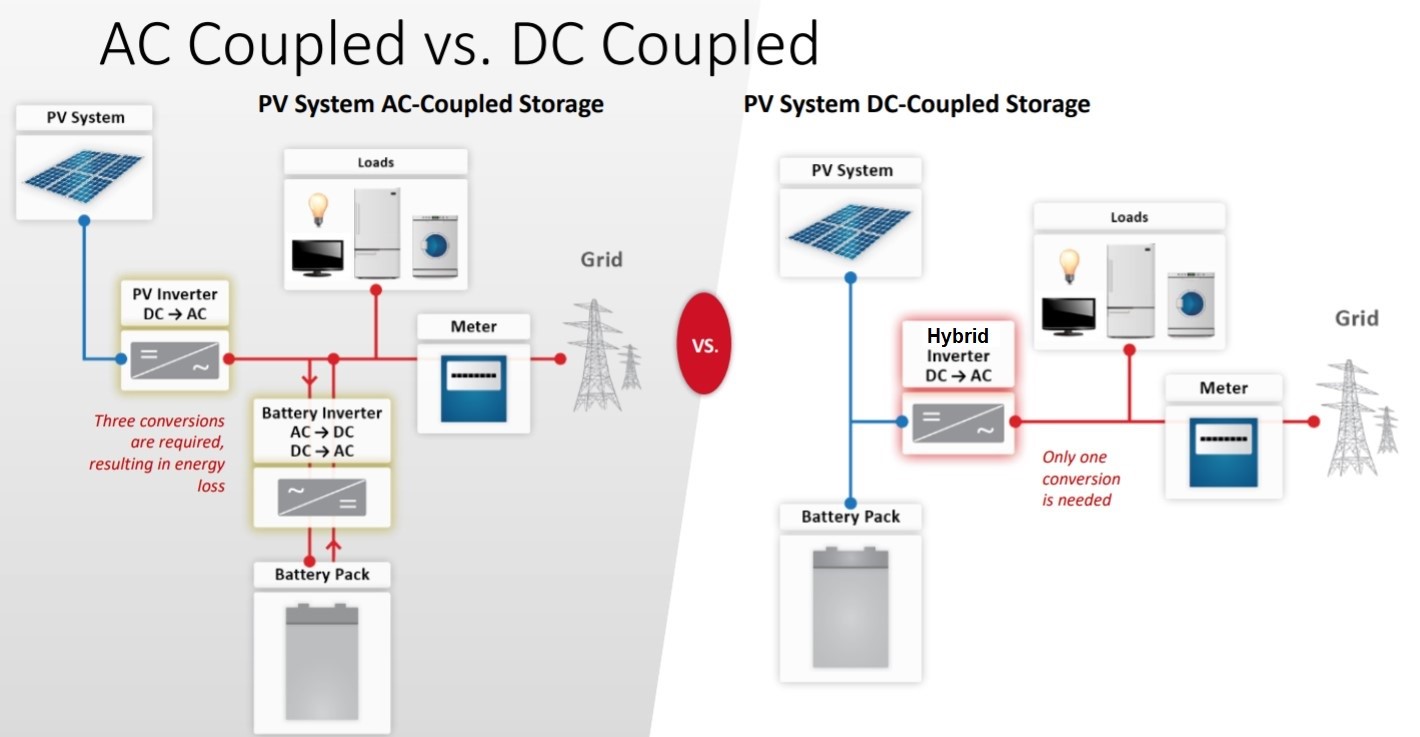 AC coupling is the simplest way to add a battery to your home. It’s called AC coupled because it connects to your home via another AC circuit, just like a solar system, air-conditioner and other common devices. Below is a diagram of how the system is connected: 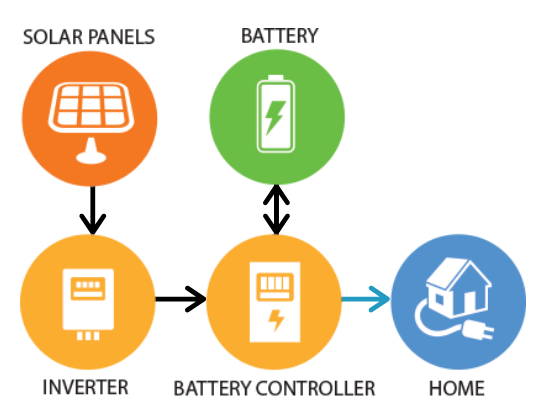 AC coupled systems are installed separately to your existing system, meaning you won’t have to worry about any compatibility issues. All your existing warranties will remain and the performance of the existing system (in a standard grid connected mode) won’t be harmed. So it’s a big tick for ease of installation, particularly if you have an existing solar power system that is still in good working order. They are also great because they allow people to install solar systems now without having to worry about not being able to add batteries later.

Another potential benefit of AC coupling is that you have two inverters, which enables you to have more power. For example, if your homes power load was 10 kW (which is very high), you had a 5 kW solar inverter and a 5 kW battery inverter. In this instance you could take 5 kW from the solar power system and the battery at the same time, provided there's enough sunlight on the panels and energy in the battery. Other configurations couldn’t do this as energy from both need to pass through the same inverter.

Because AC coupled systems aren’t directly connected to your DC producing solar panels, storing the power generated by your system is a bit inefficient. If you have excess solar power, your existing solar inverter will convert it to AC only for your battery inverter to convert it back to DC again for storage. Then, when the battery discharges, another DC-AC conversion is required. This results in notable power loss during the power conversions.

The other potential issue of AC-Coupling is limited battery charging. For example, on a sunny day, your solar inverter is outputting its maximum 5kW. However, if your home is using 4kW, that leaves only 1kW for battery charging. Depending on the weather, daytime energy consumption, and battery capacity, an AC-Coupled battery may struggle to fully charge every day.

Hybrid inverter systems are great for those who are also installing a new solar PV system (or looking to replace their small, failing or outdated solar system). Rather than purchase a battery + battery inverter + solar inverter, you can make a more efficient purchase of a hybrid inverter which will operate both systems simaltaneously. See below: 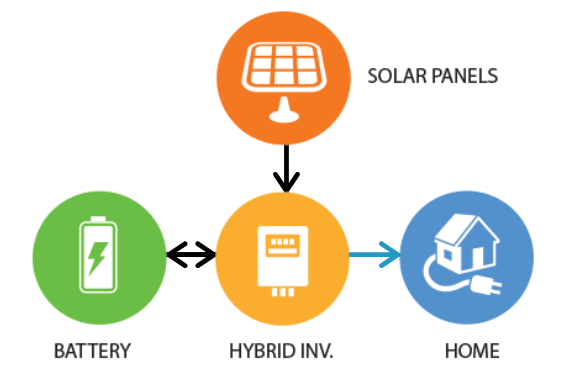 Being connected to the batteries and solar power system has its advantages. You can store power from the panels in the battery, without the need for repeated power conversions, only converting power when it is sent into your home.

You can also utilise solar power above your AC output capacity. For this reason, you’re no longer bound by the 133% oversizing rule. This is very handy for people who need a solar system bigger than 6.6 kW but are limited to a 5kW inverter.

For example, the 5kW Huawei Hybrid inverter can output a maximum of 5kW AC to the home + simultaneous max 5kW DC for battery charging. This allows up to 10kW of solar panels to be installed on the 5kW Hybrid inverter.

In summary: Efficient storage of excess solar, utilise excess solar, oversize your solar, backup power doesn’t depend on the capabilities of the existing solar inverter.

If you want a DC-coupled battery setup and you already have a solar power system in good working order, you’ll have to replace your current solar inverter with a hybrid inverter.

Some solar companies will not want to connect existing solar panels (installed by a different solar company) to a new inverter as this creates warranty issues. This means you may have to replace your entire solar panel system, or go for an AC-coupled system. 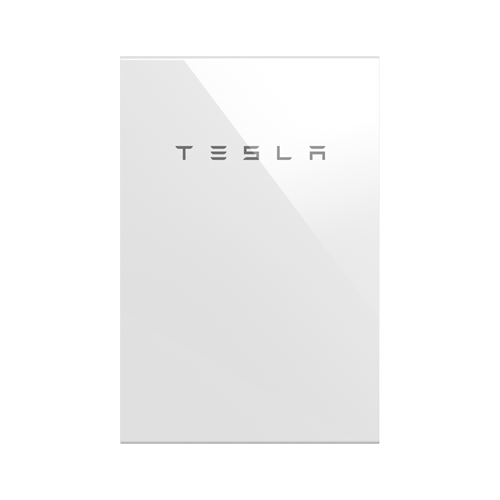 Here’s a few tips on how to best prepare for batteries.

Solar power is relatively cheap, so ensure you get a solar system that comfortably covers your daytime and night time consumption if possible. Consider any future changes to consumption as well (a growing family, the addition of air-conditioners, pools, EVs etc.). Generally, bigger is better. Installing a hybrid system when you install your solar energy system let's you be prepared to add a battery at any point down the line.

These devices are essential for battery systems, but also very handy for energy conscious homeowners with solar. They enable you to see your household consumption in real time, so you can switch a device on and see how much it consumes. You can also see how much of your solar you’re using and exporting. This not only helps you maximise savings from your solar, but helps you decide on what size battery you’ll need in the future.

This is a bit tricky, as standards for battery installation are in their infancy and may change over time. If you are building though, consider allowing some space for the batteries. This could be in a small room or space in the garage, or somewhere outside under cover and without any exposure to the sun and other elements. You’ll also want to maximise your north roof for solar.

Purchasing a hybrid or battery inverter

To add batteries, you will need a battery inverter or hybrid inverter at some stage. Many people that are installing solar now believe they should install a hybrid inverter rather than a traditional solar inverter. This is a sensible choice as it will allow you to choose either an AC-Coupled or DC-Coupled battery, rather than just AC-Coupled.

So why don’t I just go completely off-grid?

We wouldn’t recommend this. Many people underestimate just how big a solar power and battery system you would need to go completely off grid (assuming you don’t want to risk running out of energy). To protect yourself from this, you have to design and install a system that covers the once or twice a year “doomsday” scenario, where you’ll have high usage for consecutive days where conditions are poor for solar production. You’ll also have to factor in your power and energy needs, which is an intensive design process. The system that you’ll need is likely to be expensive and grossly oversized at least 90% of the time. You’ll also want the highest quality parts to reduce the chance of failure. Being grid connected takes all these costs, factors and risks out of the equation.

While batteries aren’t quite mainstream like solar yet, they are popping up in homes more and more as the cost continues to fall. There is a little more to consider with a battery system compared to solar, so getting the right advice is a must if you don’t want an expensive system that isn’t right for you. If you’re like many people who want to be ready for when they do become mainstream, installing a solar power system now with your future consumption in mind is a sensible move. Given solar is cheap, don’t hesitate going a little bigger size wise. It’s much better than having to add more solar when you install a battery. Adding a consumption monitoring device to your solar is also a great way to go, so you’ll know exactly what size battery you’ll need when the time is right.

If you're interested in a solar battery system, fill out your details below and we'll be in touch.